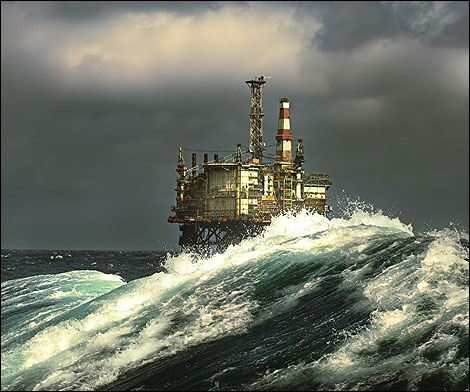 Since a string of offshore discoveries in 1969 unleashed a "gusher of jobs and investment", Britain's North Sea oil and gas industry has been a "mainstay of the national economy", says The Times. It generates more than £330bn in taxes and gigantic export earnings.

However, with oil prices at historical lows, the industry has been brought to its knees - and some reckon it is in "terminal decline".

Even despite a recent recovery, Brent crude, the international benchmark that sets the price for North Sea oil, remains below $40 a barrel. It was estimated last year that most production in the region is likely to be loss-making if prices are less than $50 a barrel.

From its peak in 1983, the sector's contribution to the UK economy has fallen from a massive ten per cent to just under 2.8 per cent in 2014. With less than a third of the original 63 billion extractable barrels remaining in the North Sea – much of which is harder and costlier to extract - many are asking if the slide can be reversed.

Industry group Oil and Gas UK estimates that the number of those employed in the sector has fallen from 440,000 to 320,000 in the space of just two years. At current levels, it calculates that more than 150 people a day are losing their job.

Figures released by the Institute for Fiscal Studies last week revealed a £10bn "black hole" at the heart of Scotland's public finances caused by the slump, prompting questions over the long-term future and the viability of the oil industry in supporting a possible independent Scotland.

What can be done?

Speaking to The Times, Sir Ian Wood, a leading industry expert and the author of the Wood Review, called on banks to exercise forbearance with companies struggling to stay afloat and urged the government to introduce a tax stimulus.

Scottish Labour leader Kezia Dugdale, meanwhile, said earlier this month that the UK government should take stakes in North Sea oil and gas assets that are "strategically important but at risk of abandonment".

This highly unusual step is a "response to concerns in the oil and gas industry that low prices could mean pipelines and hub facilities within clusters of fields could be closed down", says The Times.

Yesterday, the paper revealed that US energy giant ConocoPhillips had drawn up plans to shut down one of the North Sea's biggest gas pipeline systems in a move that "threatens to knock out ten per cent of the UK's gas capacity and a string of active fields".

In a bid to encourage renewed investment and reverse the trend for job loses, Chancellor George Osborne has announced plans to cut supplementary taxes on firms pumping in the North Sea. This could save oil companies up to £1bn over five years.

However, on Sunday, it was reported that Shell was exploring the possibility of selling its remaining North Sea oil assets in what is being interpreted as a clear lack of faith in the future and viability of the British oil industry.