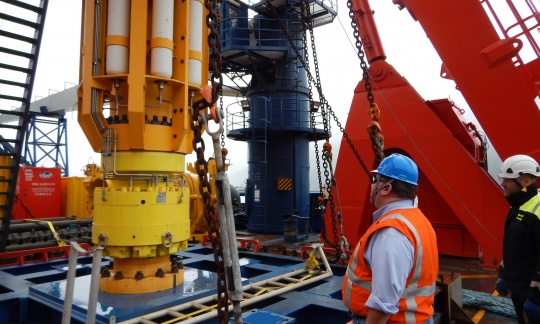 The Obama administration has announced final well control regulations with the aim to reduce the risk of an offshore oil or gas blowout.

According to statement issued by the Department of Interior, the regulations represent one of the most significant safety and environmental protection reforms the Interior Department has undertaken since Deepwater Horizon disaster in 2010, and builds upon a number of reforms instituted over the last six years to strengthen and modernize offshore energy standards and oversight.

The DOI says that, the final rule addresses all dimensions of well control, including more stringent design requirements and operational procedures for critical well control equipment used in oil and gas operations on the U.S. Outer Continental Shelf.

The rule requires operability of equipment through rigorous testing and provides for the continuous oversight of operations.

The DoI says that based on comments received during the rulemaking process, several adjustments were made to provisions of the proposed rule that are reflected in the final version.

However, the DoI has said that the changes made preserve stringent requirements regarding the safety drilling margin, interval testing and major inspections for blowout preventers, and also incorporate criteria for alternative practices that are subject to review, justification and approval.

“We have made it a priority to engage with industry to strengthen our understanding of emerging technology, to participate with standards development organizations and to seek out the perspectives of other stakeholders,” said BSEE Director Brian Salerno. “We collected best practices on preventing well control incidents and blowouts to inform the development of this rule. As a result, this is one of the most comprehensive offshore safety and environmental protection rules ever developed by the Department of the Interior.”

The new rule is in harmony with industry’s best practices, standards and equipment specifications, the Department of Interior said on Thursday. For example, the DOI said, new drilling rigs already are being built pursuant to updated industry standards that BSEE used as a foundation for the rule.

For companies that may need time to bring their operations into compliance, most of the requirements do not become effective until 3 months after publication of the final rule. Moreover, several requirements have more extended timeframes for compliance, DoI said.

American Petroleum Institute (API) said it is reviewing the final Well Control Rule. API cautioned that elements of the initial proposal were found to have technical problems and, if left unchanged, could make offshore operations less safe.

“We are committed to safe operations and support efforts by the government to build upon the progress already made by the industry on safety,” said Erik Milito, API upstream group director. “We must make sure that technical changes were made to aspects of the government’s initial proposal that could have made offshore operations less safe.”

Included among the list of concerns filed in last year’s comments was the recommendation by the government to shift operational decision making from rig site personnel to offsite personnel, API said. The industry believes that onsite personnel have the best understanding and most complete picture of the current operation, key risks, and critical considerations.

“Offshore oil and natural gas development in the U.S. is safer than ever before thanks to diligent, continuous industry leadership and efforts of industry and regulators,” said Milito. “It is imperative that BSEE ensure any new regulatory requirement does not unnecessarily erode the strong safety and national security gains that have been achieved in the last half decade.”

“Energy development in the Gulf of Mexico has helped make the U.S. the number one producer of oil and natural gas in the world, and has made us energy secure. This rule will affect every offshore energy project for years to come. It is essential to get it right.”

In response, Director of Sierra Club’s Lands Protection Program Athan Manuel said: “Deepwater Horizon is a constant reminder of the dangers offshore drilling poses not only to our environment, but to the safety of our workers as well.

“While we are encouraged to see the Obama administration establish strong worker safety measures, there is no amount of standards or regulations that can ever make offshore drilling safe for workers, our climate, or our environment.”